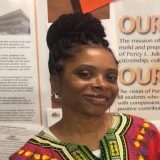 Kimberly has been a Family Christian Health Center board member since 2017. She currently serves as Secretary.

Kimberly is a 27-year veteran educator for Chicago Public Schools, where she teaches Journalism and Television Broadcast Technology. She also produces socially relevant documentary films about African American life and culture, and has a particular interest in screenwriting and cinematography.

Kimberly received her education from the University of Michigan and the Ohio State University. She is a member of the Chicago Teachers Union, the National Association of Black Journalists and Delta Sigma Theta Sorority, Inc.  She is also a board member of the Blair Holt Memorial Foundation and the
Media Communications Department Advisory Board at Kennedy King College Chicago.

This health center is a Health Center Program grantee under 42 U.S.C. 254b, and a deemed Public Health Service employee under 42 U.S.C. 233(g)-(n) which means we are deemed under the Federal Tort Claims Act. This Health Center receives HHS funding and has Federal Public Health Service (PHS) deemed status with respect to certain health or health-related claims, including medical malpractice claims, for itself and its covered individuals.